Having received a nice shiny new Kent twin paddle morse key for Christmas, I was faced with finding a way to learn to drive the thing before going on air! Although my radio has a built-in keyer, it only operates on transmit so I would have to run the radio into a dummy load and would be confined to the (freezing cold) attic for my practice sessions. What I needed was a small, portable keyer plus practice oscillator that would drive a pair of headphones and allow me to practice in comfort without disturbing the rest of the family.

Rummaging around in my “junk box”, I found an Atmel ATTiny45 8-pin microcontroller which has just enough I/O pins to do the job. I decided that the circuit needed to be battery powered for portability and I happened to have a battery holder for two AA cells, so that defined the supply voltage. The ATTiny45 will work happily down to at least 2.7V (1.8V for the ATTiny45V).

I wanted to be able to easily adjust the keyer speed as my sending (hopefully) improved. The ATTiny45 incorporates a 10-bit ADC so I decided to add an analogue speed control via a potentiometer, with suitable minimum and maximim speeds.

I needed to use one of the ATTiny45's timers to time the “dit”s and “dah”s, and fortunately it has a second timer with PWM output which made generating a sidetone very simple. A straight keyed output is used to drive an LED, although it could equally well be used to key a transmitter.

Two inputs are needed to handle the “dot” and “dash” paddles, making a total of five I/O pins with the speed control input, sidetone and keyer outputs. The ATTiny45's reset pin may be used as an I/O pin, but this prevents the device from being re-programmed in circuit which was essential for software development. So all the available I/O pins are used, and with just six external components it is possible to construct a fairly compact keyer and practice oscillator.

Resistor R1 sets the sidetone volume. 10k worked well with the Walkman-style earphones I had to hand. Although the sidetone is a square wave it sounds surprisingly OK. A small capacitor across the headphone terminals could be added to roll off the high frequency harmonics if you prefer a more mellow sound.

R4 limits the current through LED DS1 to 2-3mA. A low-current (or high brightness) LED may be required if you need to be able to see the LED at a distance or in bright conditions. The 5mm green LED I had to hand is perfectly visible in normal indoor conditions. 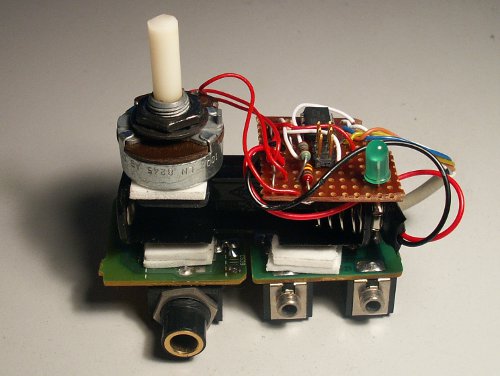 As I wanted to build the keyer quickly over the Christmas holidays, all the parts had to come from my “junk box” so the circuit is built on a small scrap of Veroboard. The jack sockets were recycled from old audio equipment, hence the PCBs and the fact that there are two headphone sockets.

The battery holder provided a convenient base to mount everything on, using double-sided sticky pads. A really “ugly” construction method!

I found that the keyer worked very well, and within a few days I was confident enough to take to the air, albeit with some rather wobbly sending at times.

The software for the keyer project is available here.